What Child Is This? 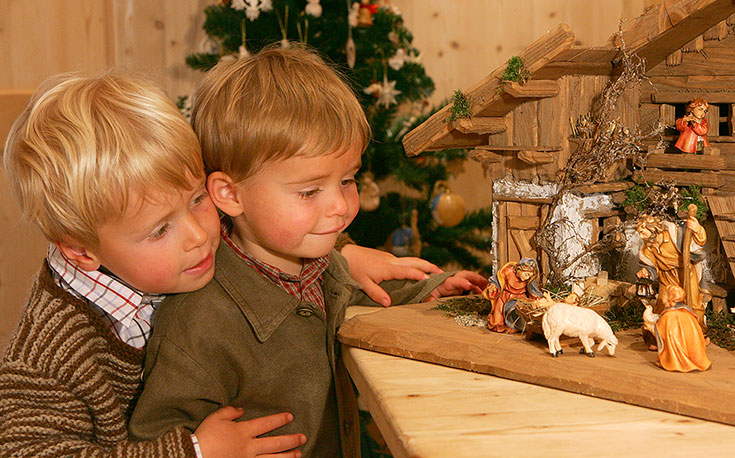 The famous Christmas carol, penned in 1865 by English writer William Chatterton Dix on his “death bed” (he later recovered), asks the question “What child is this, who laid to rest, on Mary’s lap is sleeping?” and answers “This is Christ, the King”.  Interspersed in his thoughtful lyrics, set to the tune of the medieval English song Greensleeves, are references to shepherds, angels, ox and ass, incense, gold, and myrrh – familiar figures and objects in a traditional nativity scene (also called a crèche).
Nativities are very popular during the Christmas season – millions of people have small versions in their own homes (we have six!), and many larger scenes are set up in church parking lots, town squares, library courtyards, and front lawns.  One of our local churches has a crèche display in their community hall with over 100 different nativity scenes from all over the world.

Where did this tradition begin?  Many expect the answer to be Germany because so many of our modern Christmas traditions come from the Germanic world, but in fact the nativity originates in medieval Italy.
In 1223, St. Francis of Assisi was visiting the small village of Greccio.  As Christmas approached, he was struck with the idea of creating a scene to represent the birth of Christ for the people of the village.  This was a novel idea, and as such he requested and was granted permission from the pope to create the first nativity scene, to be displayed during Midnight Mass.  It was a live scene – real baby, real donkey, real hay.  According to his biographer, “St. Francis stood before the manger, full of devotion and piety, bathed in tears and radiant with joy.”  The scene so moved the great monk that he could not bring himself to even utter the name of the Lord, instead referring to him repeatedly as the Babe of Bethlehem in his sermon that night – indeed, the whole village was moved to tears. News of the spiritual outpouring reached the Vatican, and the tradition of the nativity scene was spread throughout Europe.
This tradition has continued to today, where you will find beautiful nativity scenes in cities, towns, and villages throughout Europe during the Christmas season.

Europe is the home to so many of our traditions, both Christmas and otherwise.  Join OneLife Tours in Europe for a meaningful and joyous trip led by a passionate, expert guide.  Our testimonials speak for themselves.

Below are some great nativity scenes from around Europe.  Enjoy!